5 athletes with the best butts

We like big butts, and we cannot lie! Everybody loves to talk about good-looking rear ends; even celebrities strive to reach that goal whenever they work out. We hear our friends talk about it, we have relatives who plan their new workout routine to achieve it, and everyone on social media seems to post about it.

According to plastic surgeon, Dr. Kendall Roehl having an attractive set of buttocks has become a trend in recent years. “More and more, people have begun to develop this section of the body through the means of diet and exercise,” she says.

The popularity of shapelier butts can be attributed to celebrities and athletes, whose field of work may require the development of this body section in order to achieve and sustain their continued success. That said, there’s no denying that athletes have great bodies!

With that, let’s take a look at some of the best assets the world of sports has to offer.

Athletes who had the best butts

Sasha Banks is an American professional wrestler for the WWE (World Wrestling Entertainment). Sasha had her five championship reigns in the company and is currently one of their most popular performers.

Sasha’s diet is more about eating meats, but she makes sure that she gets the right amount of vegetables. In a recent interview, Banks admitted to working out five days a week, with extra cardio work to improve her performance in the ring.

Olivier Giroud is a striker for the English team, Arsenal Football Club and also a part of the French National Team. In 2010, he was voted as the Ligue 2 Player of the Year. The following year he bagged the gold medal and became the Top Goalscorer of Ligue 1.

Giroud is also called the “French Beckham” because of his resemblance with the famous footballer, David Beckham. His workout routine is all about muscle strengthening with the help of a balanced diet of juices, toasts, and fruits.

Hope Solo is a World Cup Champion and goalkeeper for the United States National Women’s Team. For eight years, she remained undefeated through 55 consecutive matches. She now fights for women’s rights and gender equality.

Hope is one of the many women athletes who has a remarkable physique, which is why she’s become an aesthetic goal for many women. Her diet plan consists of maintaining balanced meals and eating a steady amount of carbs to keep her energy up on the field. Her regular exercise routine is built around the development of her core strength and ability.

Matt Anderson is a NORCECA Champion and outside hitter for the United States Men’s National Volleyball team. In 2008, he received the gold medal during the Pan American Cup, and would go onto receive a number of gold medals, including the 2014 World League and 2015 World Cup.

Matt’s workout routine is more on loading/unloading, flexibility stretches, and other exercises that will help him build up strength for landing. He regularly enjoys big meals that consists of chicken breasts and vegetables. Additionally, he sustains his energy during games through the consumption of power bars and energy drinks.

Sydney Leroux played for the United States Women’s Soccer Team in 2011 and was included in the 2015 World Cup Championship. She is an all-time leading scorer in the U.S. with 24 goals in 39 experiences.

Sydney’s go-to workouts are spin classes; she does flywheels and soul cycles. She also tries to lift as much weight as her schedule requires.

How Can Non-Athletes Improve Their Butt Shapes?

For athletes, maintaining a balanced diet with regular exercise is not a hard job. But for ordinary people, exercise and diet may not be enough to attain their aesthetic goals. This can lead some to seek out surgical alternatives, such as body contouring procedures like the Brazilian butt lift.

During surgery, fat is liposuctioned from parts of the body such as the hips, thighs, and mid-section. The harvested fat is then purified before it is injected into the buttocks to create a fuller and more natural shape.

“The Brazilian Butt Lift is often suggested by plastic surgeons in situations where regular diet and exercise fall short,” shares Dr. Roehl. “While the results will look and feel natural, it is important patients maintain realistic expectations and continue to engage in frequent exercise and diet.”

During their initial consultation with a plastic surgeon, patients will be advised if they need to gain or lose weight before surgery. In total, the entire procedure may take between 3–4 hours, depending on the amount of fat transferred and how invasive the procedure is.

Getting the Most from Your Natural Assets

Each and every person has something unique about their body; everyone comes in different shapes and sizes. There are definite butt shapes (see image below) that can truly compliment a person’s body. But differences in physique may inhibit the development of certain aesthetic goals, and that’s fine. We are all different and we have the freedom to change any part of our body that we desire. 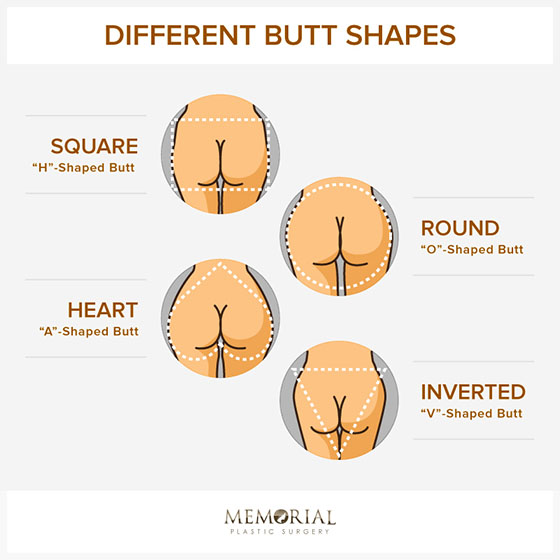 Like what Dr. Roehl’s colleague, Dr. Patrick Hsu used to say “The role of cosmetic surgery is to enhance what is already there.”

And as such, procedures like the Brazilian Butt Lift should only be an option when the buttocks can no longer be enhanced through conventional means. Because of this, surgeons such as Dr. Hsu and Dr. Roehl recommend consulting with a plastic surgeon first to ensure the procedure provides safe and satisfying results. But even then, it is important to remember that no change can mean anything without the support of a healthy lifestyle.